If you do any traveling on I-10, chances are you have seen McKinney Wrecking across from UTEP. As far as I know, it’s the only recycled building materials lot in El Paso (the only interesting one anyway.)  The main building that houses their offices was once part of Prices Dairy and was moved to its current location next to Globe Mills some time in the 80’s.  If a large building is torn down in El Paso, chances are any historically significant pieces (valuable too) will wind up here. Closed in 97, housed here since

From used claw foot tubs, doors, cabinets and lighting fixtures, if it can be reused they’ve got it.

You want some beer and nacho soaked seats from Dudley field? You’d better hurry, they only have 3 rows left! Are you tired of the neighbors parking in front of your driveway? Set up a large no parking sign: You will need to supply your own “No” though.  Fun fact, this sign is from the parking garage that used to be at Mills and Oregon, prominently used in the the first “The Getaway” movie. It has since been demolished and replaced with a bigger garage.

You can wander around the lot for hours and any given time you stop by you are guaranteed to see something new. When I was walking around I noticed something on one of the Globe Mills silos that I hadn’t noticed before: This would be tough to see from the freeway

It’s almost baked off but the faint remains of an old Cream of Wheat sign can be seen on one of the silos.  I walked around a bit more and snapped a few more pictures, of which you can see here: McKinney Wrecking 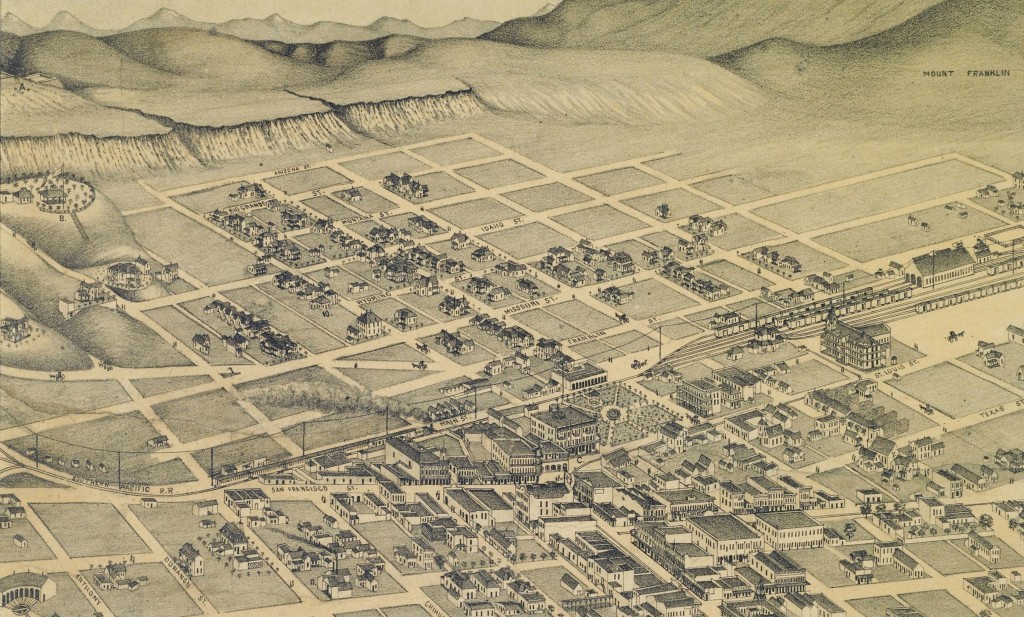 There is no shortage of antique stores in and around El Paso.  By far the largest and most unique has to be the Whoppee Bowl.  If you do any driving between El Paso and Las Cruces you can’t miss it, its right off the Vinton exit: During my last pass I noticed that they had a large airplane in their yard, very similar the the planes I had spotted in Fabens.  Today’s work load was kind of lite so I drove out there to take a look.  In addition to the plane there was a large white rooster, a exact copy of the green one at the lumbar yard.  A curious coincidence or the relics of some long gone chicken chain, who knows?

The building is 11,000 square foot building of  collecting bliss. The owners are in the process of adding a second level to the inside to be able to display more of the wares from the 35 of dealers who rent space there.  Cash registers, wooden statues, old wood stoves, you name it its here. Navigating through the isles was tricky. I had to be extra careful to not smack my camera on some precariously placed antique while walking around. One thing that jumps right out at you is the very large Nazi flag hanging from the center.  I would think that to be a bit of a liability, possibly alienating some potential customers but hey what do I know? I could have spent a few more hours here happily snapping pictures but lunch was up and it was time to return to the less dusty confines of my office.  I’ll have to go back but for now you can see what I shot here: The Whoopee Bowl