Cadmium Yellow takes eons to dry, its like a watching snails race in tar.  Yes, I could add cobalt dryer but long term that can lead to cracking so I try not to do that. I’ve finished off the car, next will be to tidy up the plane.

I was driving down Mesa and happened to be passing by the Westside Church of Christ’s sign. It has always prominently displays some uplifting message.  Now, if you have lived on the Westside of El Paso, like me you will probably not remember a time when they’ve not done this. They are the original Twitter account for God. 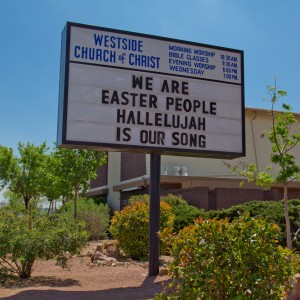 Should be #Easter People

I can recall from way back when while riding the bus to Moorhead Junior High, us hooligans often would try and twist the phrases into something funny or gross. Hilarity and disrespect would always ensue.  After a while you tend to dismiss them but its always amazing that as far as I know they never repeated themselves even on the sign itself. Here’s the same day’s flip side: 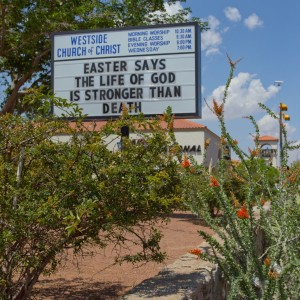 That takes some kind of skill but I guess with a Bible in hand, you can wrangle phrases all day long and not be duplicative. Personally, I’m more excited about the sign just down the street: 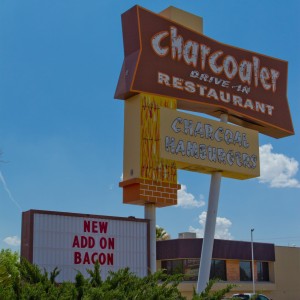 On my way in to work today, I spied something odd sitting at a bus stop at Country Place and Country Club Road.  Driving by it looked like a person covered in cellophane: I instantly thought of Mark Jenkins and turned around to check it out.  Parking was kind of dicey though, Country Club is a two lane street that is kind of a mess in the morning.  Props to whoever did this, it certainly was collecting a bunch of stares from the morning commuters that passed by.  Upon closer inspection, there was a few things that were a little off…time for an impromptu art critique! Jekins’ balloon pieces work because their interaction with the surroundings is subtle but integral to the piece as a whole, the piece below is an example:

The bent bus stop becomes the perfect prop for the balloon boy to pull down.  The illusion works because the angles and proportions are correct fooling your mind into believing the impossible.  I had initially thought that maybe the anonymous artist might have reconstructed the bus stops signage to be incorporated into the message but that’s not the case. Its a simple advertisement for insurance.  So what is the message here? Note, I would have not known this by simply driving by.  The text isn’t large enough to discern from the street.  The intent may have been to draw the viewer in but without adequate parking most people will go on with their lives.

If you did stop you would notice the figure appears to be female so in that context the words are some sort of play on two possible obvious themes. One, disparaging remarks made unto the sculpture as a reflection of the artist being treated by others or Two, a inward projection out, of how the artist feels about themselves. There is a crumpled bag of Funyuns under its right hand so we might have a clue. 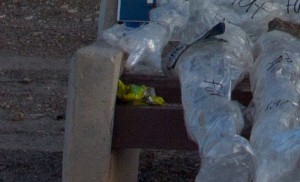 Now to me that presents a bit of a problem. Are you fat and have thunder thighs because you eat junk food all the time? Do you eat junk food because you feel empty causing you to be fat thus fulfilling your our self hate prophecy? Was the Funyuns bag just trash that happened to be there during the installation.  As the viewer we don’t know. There’s not enough information.  Using big heavy rocks to hold the sculpture in place, breaks up the continuity of the piece as well and distracts from the intended message.  The black X across the heart may have any number of meanings but the X on the right thigh only confuses that.  Is the whole thing some sort of “Anti Bully Message” that’s all the rage in schools these days? Who knows. I will say this, I did stop and take a look so in that regard the piece was successful. Despite some presentation and constructions problems it did make me snap a few pictures and write about it so the joke may be on me.  Well there may be a few other people who get duped into taking a look at it.  As I was leaving, I heard sirens in the distance but couldn’t place the direction.  Traveling up Country Club over the Rio Grande bridge, an ambulance passed heading towards the bus stop quickly followed by a fire truck.  I guess somebody else saw it but didn’t have the time top stop and check it out before reporting it to the authorities, funny.  Score one for guerrilla art!