I now have a new addition to my Kress collection:

The original muse in our very own El Chuco:

This fantastic example in that Tex-Mex town, home of the Alamo:

And now one from “West Texas”

I’ll post up more from a recent trip to Fort Worth tomorrow.

Last week when I was in the Dallas/ Fort Worth metropolitan area I had the chance to do some urban exploring with a local friend. Virginia had a 2 day conference to attend and we were staying up by the Texas Motor Speedway.  Using Google maps, I spotted two little cemeteries that were really close to our hotel. On the last full day there, I again headed out with a friend to see what was to see:

View Elizabeth and Chapel Cemeteries in a larger map

Our first stop was Elizabeth Cemetery.  It’s all that remains of Elizabethtown because like many small towns, once the railroad passes you, its time to turn out the light.  While nothing may be left of the village the cemetery is still quite active with burials as of this year.

The cemetery is well maintained and under the watchful eye of a remote security camera. The march of progress has put a modern neighborhood right behind it but one can imagine that this was once out all by itself.  One of the more notable features was the presence of these interesting seals on some of the gravestones:

We walked around were kind of amazed at the range of dates buried there.  Infant mortality was pretty high in the 1800’s and it shows here.  As artists who had to suffer through some graphic design classes we noted one amusing example of the importance of laying out your text before committing to the final design:

You almost have to read it in a Chandler Bing voice.  Even though suburbia encroaches nearby, this area is still very much ranch or farm land.  Down the road is well house with the remains of a windmill.

This plot of land is a cow pasture and probably has been since it was first homesteaded.  The skeleton of the windmill is completely dwarfed by the tree.  Upon closer inspection you can see that in this instance nature is triumphing over industry:

The tree has completely engulfed one of the legs of the windmill.  No worries though, the windmill most likely hasn’t been used since power lines were pulled to the well house some time in the 20’s.  Continuing on down the dirt roads toward Chapel Cemetery, we passed the remains of a house.

The fire here looked like it burned with some serious intensity.  All that remained was the firebrick from the chimney and metal scraps.  The rest was ash.  In locating this site on Google maps their satellite map shows it burned down but the 3/4 view yields this: 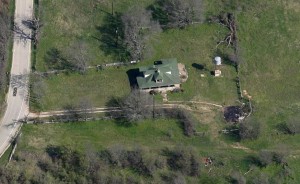 It shows only the back garage as being burned out.  From this image the house looks well maintained so one can only wonder what circumstances lead to the structure fire. Continuing on down old Denton road and passing an orchard we stopped at Chapel Cemetery.

Chapel Cemetery was smaller than Elizabeth.  It didn’t have the fancy gated entrance or camera setup but was well maintained.  The nearby orchard and other industrial activity may have kept vandalism down. Chapel seems to be dominated by a couple of  families, Francisco and Raibourn.  The Raibourn plots were pretty extensive but right in the middle was this one spelling oddity:

Did Mitchell want to be different? Was he randomly inserted here? Simple coincidence?  My money in on the “Lazy Stone Mason” from Elizabethtown who likes to hy-phen words, misunderstanding which Rayburn he needed to use. The last two prominent features here were these odd tree looking gravestones:

They carry a “Woodmen of the Word” seal which I hadn’t noticed before in any of the other cemetery hops I’ve done.  A quick Google search turns up that the Woodmen were a fraternal benefit society which has grown into a financial services organization.  I would have never known.  I’m so glad Al Gore invented the internet.

In all it took us about an hour and half to see the 4 stops on the map and made for a nice   morning trip.  The full Flickr set can be viewed here:  Elizabeth and Chapel Cemetery

Right next to the Fort Worth Stockyards is a large abandoned industrial complex that used to be the Swift Meat Packing Plant. It was part of Gustavus Swift’s family of companies and was in operation from about 1902 to 1971.  It soon fell into disrepair due to numerous fires from trespassing vagrants, gang activity and graffiti taggers.

There are still several large buildings on the property that are open to some urban exploring though care should be taken, it’s quite apparent that numerous homeless have taken up residence here.  I didn’t do this excursion alone. I had a friend with me as a second set of eyes. It’s funny but one of the creepiest things we encountered was this lost child’s toy:

It really puts some nightmarish Freddy Kruger/Halloween thoughts in your head.  The first building we entered, Processing 1, was the smallest at the complex and had some of the freshest graffiti:

The names I’m giving these buildings are for reference and based on the order we entered them or from what they looked like.  Processing 1 was two stories and except for the graffiti, it was rather unremarkable.  Next door was Processing 2:

It had a lot of internal damage from fires and the second level wasn’t accessible. The stairs were missing and we didn’t want to chance climbing up the outside ladder. Behind Processing 2 was the Garage.  It was a large open metal structure adjacent some storage areas. It had one of the more interesting homeless shelter setups:

Most of the doors were free to swing in the breeze so as we wandered around we could hear various banging and squeaking which really plays with your mind. Fires and the passage of time have really done a number to the place.  Interestingly though, in around 2008 the site was used as a set piece for the TV show Prison Break.  They converted one of the structures into a South American Prison and added several guard towers:

The grey stucco facade and windows are complete fakes but its interesting how your mind is fooled by the movie magic.  The three guard stations that were built also have paint that mimics age but upon closer inspection you can see the timbers are new.  Its a sharp contrast to the wood that’s been around since about 1902 making up the roofs of the warehouse structures:

The remains of the roof looked like it could come down at any moment but that doesn’t scare the tiger guarding the place.  He wasn’t the last toy we came across, parked outside of Processing 4 was this little tike:

If you will notice, the fourth floor of Processing 4 has no windows.  Winding up the interior stairwell lead us to a room that was behind a large heavy refrigeration door:

It was dark, but the sky lights let in enough light to see that the walls had been painted black causing the graffiti to also glow as if under black light. That room kind of creeped us out so we didn’t stick around there.  The last structure we entered was the largest and had extensive damage to it’s northern face.  The wall had completely fallen exposing the interior to the elements:

This building is different from the others in that each large room is accessed from the stairwell through large refrigeration type doors. It kind of implies that every floor was heavily cooled for what ever processing that went on.  It also has a large service elevator that would have serviced all five floors. We were about out of time so we headed out to meet back up with Virginia and get some much deserved beers.  In total we spent about 3 hours there and the complete Flickr set can be viewed here: Swift Meat Processing Plant