While downtown this weekend, I stopped to focus on a sculptural installation right outside of the El Paso Museum of Art.

“Identidad Geometrica” was designed by Oswaldo Sagástegui and built by his son Mauricio Sagastegui.  The abstract sculpture was installed at the entrance to EPMA, in the spot originally home to Luis Jimenez’s “Vaquero”. 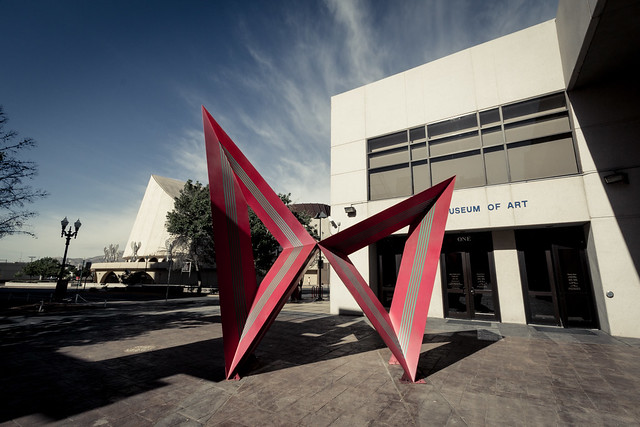 A gift by a local art patron, it fills the void left by “Vaquero”.  I miss the old “Vaquero” piece.  It had raw power and emotion, greeting you with a vibrancy that’s a sharp contrast to “Identidad Geometrica’s” angular geometry. 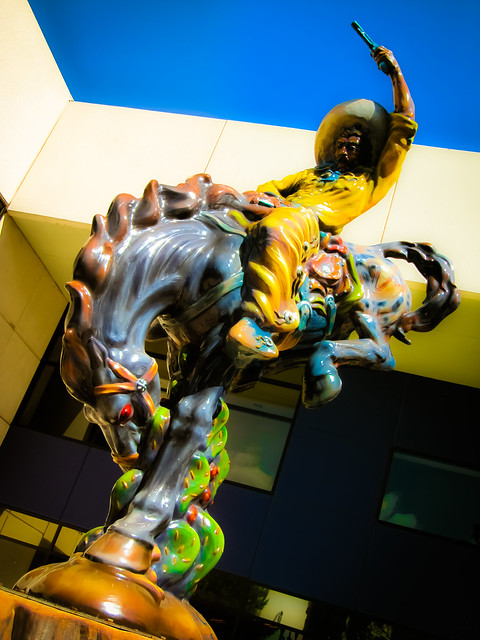 “Identidad Geometrica” is a significant piece in its own right.  At close to 16 ft high, it plays well with the sun as it travels across the the El Paso sky. The prism/triangle shapes cast interesting shadows and allow for unique views through them.  It’s been here for a couple of years now and I suppose it will grow on me. 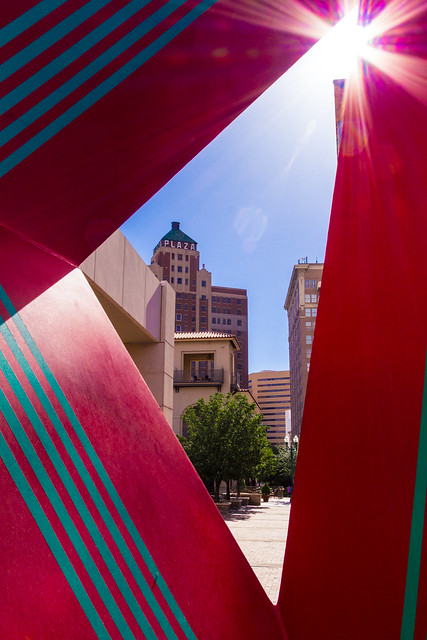 At the center of Jan Jacinto Plaza is a Luis Jiménez sculpture titled “Plaza de los Lagartos.”  The piece pays homage to the parks unique history, once being the home to live alligators.

The tale of the alligators is a sad one.  Three were added to the park in the late 1800’s and were the main attraction for decades. Unfortunately they were frequently targeted by vandals until they had to be permanently removed from the park. Their last appearance in the park was in 1974. The sculpture was part of a mid 90’s attempt to revitalize the downtown area.  It originally was more kinetic, featuring water fountain and misting elements. Currently the fountain has been drained and the water features turned off. The ever present desert sun has faded the fiberglass sculpture quite a bit. San Jacinto Plaza had served as the Sun Metro transportation hub for the Downtown area.  This lead to an abundance of people waiting in the park for the bus as well as pan handlers and vagrants who slept in the grassy areas.  To prevent that, the grassy areas were fenced off making the park not very park like.

Recently Sun Metro has moved the hub and now the park is rather empty.  The revitalization bug has once again been caught by city council so to make the park more people friendly, the city has removed the fencing surrounding the grassy areas. Surprising that little change really opens up the park.  If I still worked downtown I would certainly eat my lunch here.  More changes may be afoot though as a polarizing plan to revitalize the park even further has been drawn up by an outside design firm.  One of the most prominent changes was the removal of the sculpture from the park altogether: San Jacinto Redesign

The alligators now have their own Facebook page (Los Lagartos) in protest to the redesign and others around the city have voiced concerns as well.  I agree that a redesign should include some elements from the parks past.  Jimenez’s sculpture could be refurbished and better incorporated into a water feature prominently drawing from the parks historical significance.  If removal is still in the cards, then one would hope that any reuse of the sculpture doesn’t wind up being an affront to the original artist intent. Old view from Mills and Oregon

The city should follow the recent revitalizations of the Plaza Theater and the Mills building.  Both have been brought into this century while maintaining their heritage.  The Mills building even added back some nice architectural elliments that had been removed by the previous owners refurb in the 70’s: That’s the one thing that El Paso really has going for it, architectural history.  After being largely neglected but left intact, we are finally waking with the desire to improve our downtown.  We should resist the attempts to go whole hog modern, we are never going to be “that city”.   Lets move forward by better using what we have.

A larger flicker walk through is here: San Jacinto Plaza